The best pavilions at the 2022 Venice Biennale - Our Selection

After the cancellations due to the Covid pandemic, the 59th edition of The Venice Biennale, titled The Milk of Dreams, opened last April 23rd and will welcome visitors until the 27th November 2022, curated by Cecilia Alemani. “As the first Italian woman to hold this position, I intend to give voice to artists to create unique projects that reflect their visions and our society”, Alemani declared.

A true groundbreaker at this biennale – and the recently proclaimed winner of the Golden Lion award - is Sonia Boyce as she is the very first black woman to represent Great Britain. Boyce’s colorful videos feature five black female musicians (Poppy Ajudha, Jacqui Dankworth, Sofia Jernberg, Tanita Tikaram and Errollyn Wallen) who improvise, interact and play with their voices.

Sonia Boyce’s pavilion is a collaborative and social practice-led installation involving video, sound, wallpaper and sculptural objects. As the artist explains: "Few would question the enormous challenges we have collectively faced over the past two years. What has shone through, for me, in this journey to create a new body of work is the irrepressible spirit of human creativity". 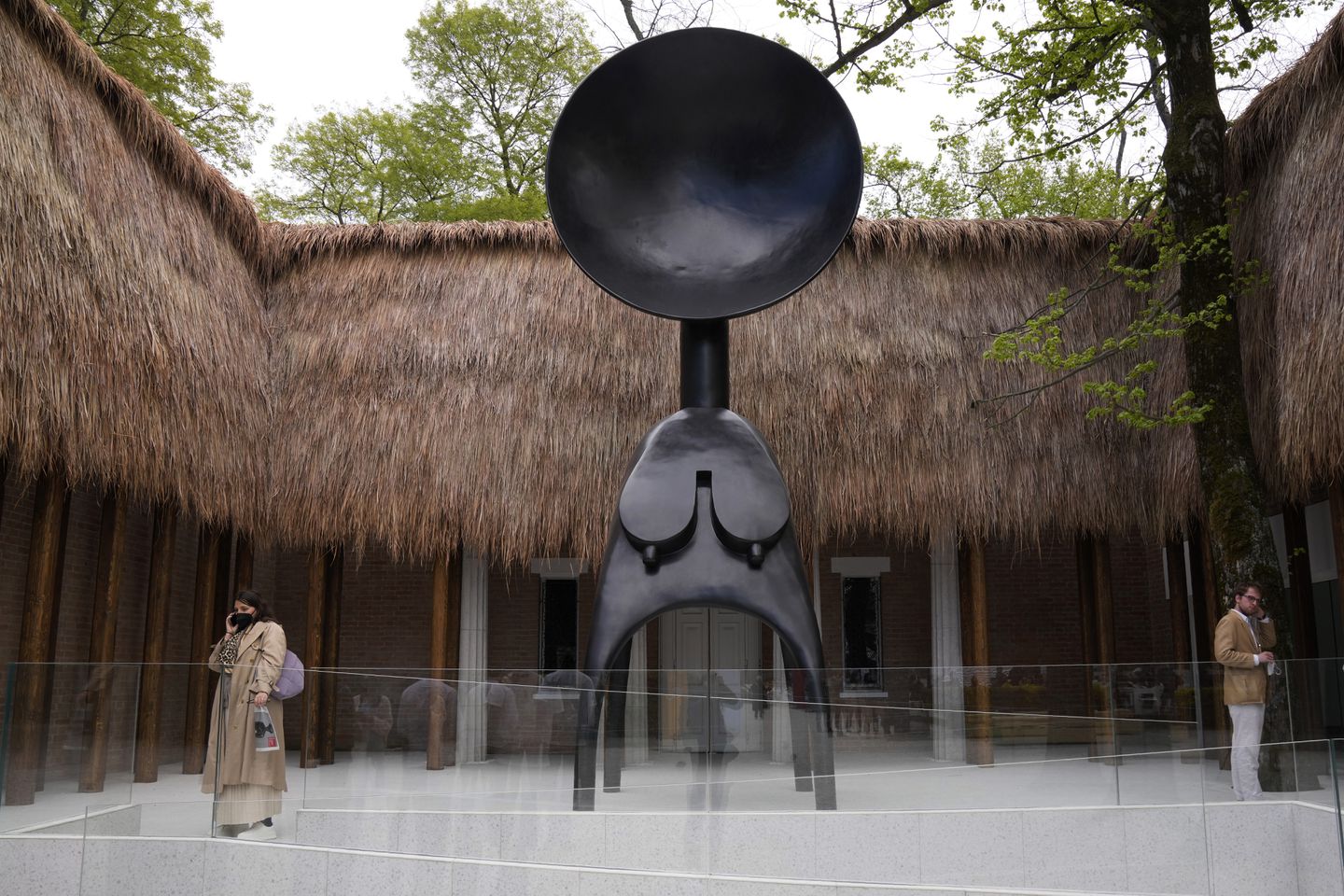 Definitely one of this year’s headliners, sculptor Simone Leigh’s Venice exhibition explores and elevates ideas about history, race, gender, labor and monuments, reclaiming powerful narratives for black women, staged ahead of a major solo show at the ICA Boston in 2023. As Jill Medvedow, ICA Director and Co-commissioner for the US Pavilion, said: "The scale and magnificence of Leigh’s art demands visibility and power; it is probing, timely, and urgent".

Leigh's large sculptures at the US pavilion depict black women whose traditions “have been left out of the archive or left out of history.” The neo-classical architecture of the outside of the pavilion is also a new work of art. It has been cleverly transformed with thatched roof and wooden poles to replicate an African Palace. Standing at the center of the outdoor forecourt is Satellite, a 24-foot-high sculpture that recalls traditional D’mba, a headdress shaped like a female bust created by the Baga people of the Guinea coast. 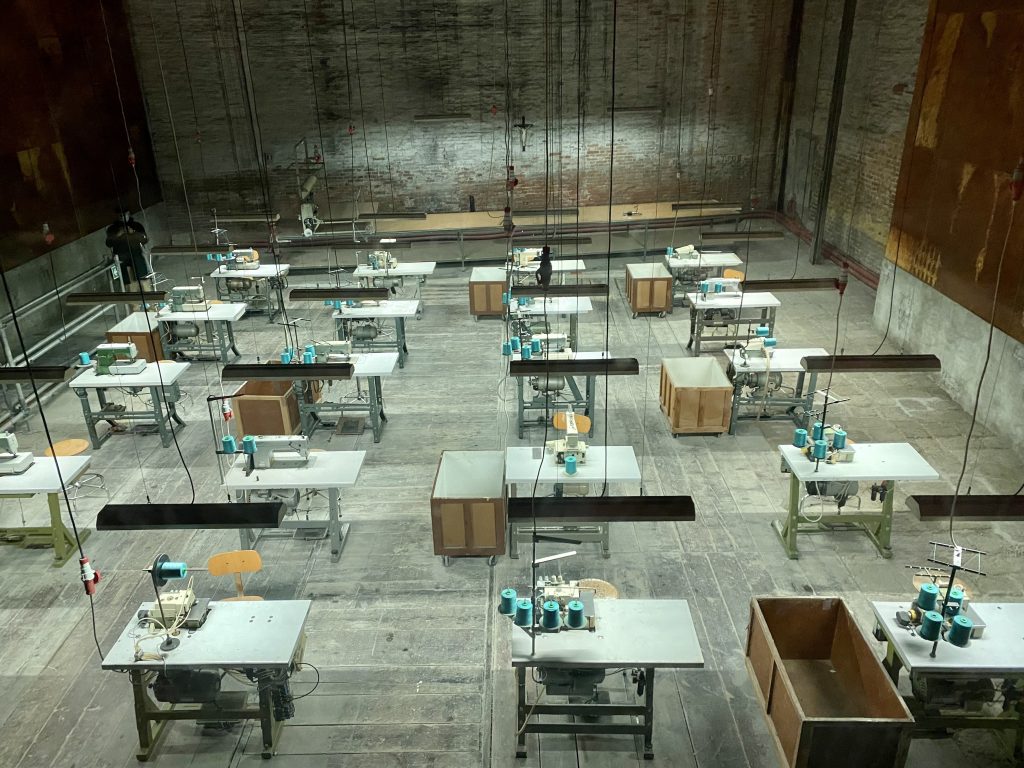 History of the Night and the Fate of Comets

For the very first time in history, the Italian Pavilion features the work of a single artist only. This privilege has gone to Gian Maria Tosatti, whose vast, environmental and site-specific installation occupies the entire space at Tese delle Vergini.

This powerful and unsettling work - titled History of Night and Destiny of Comets - is a tale of dualities: between man and nature, sustainable development and territory, ethics and profit. 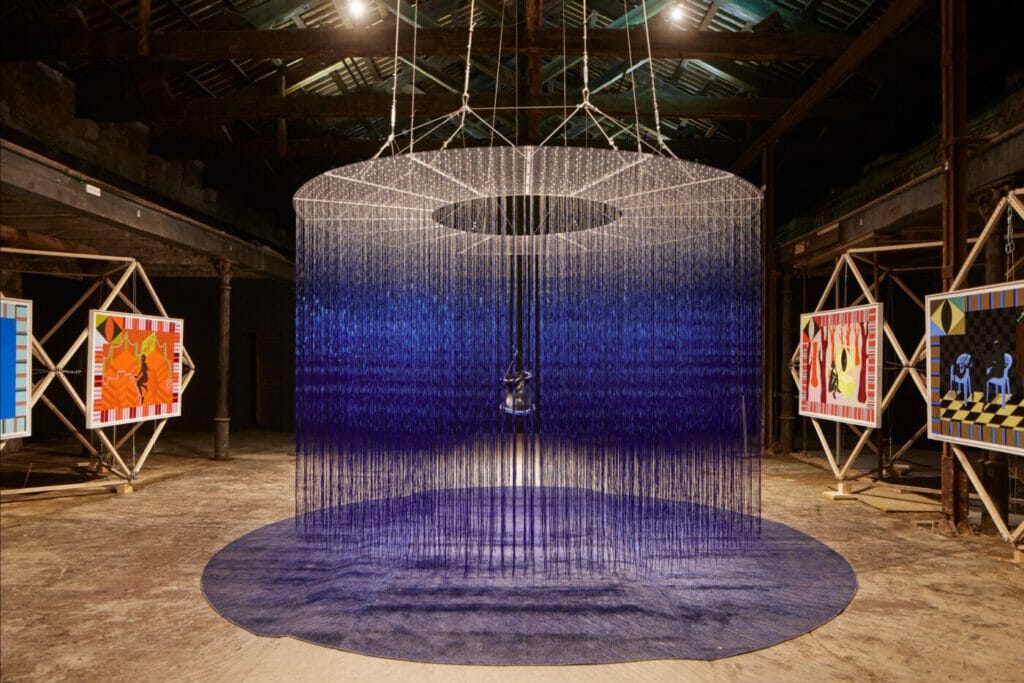 Black Star - The Museum as Freedom

Following its debut at the Biennale Arte 2019, and truly as spectacular as the first show, Ghana is presenting the group exhibition Black Star – The Museum as Freedom, featuring large-scale installations by three artists: Na Chainkua Reindorf, Afroscope and Diego Araúja. The show borrows its name from the Black Star that symbolises Ghana through its flag, national football team, and most notable national monument, and also the connection of Africa with its diasporas.

With paintings and a large installation, Na Chainkua Reindorf creates her own mythology of Mawu Nyonu, a fictional secret society made of seven women. 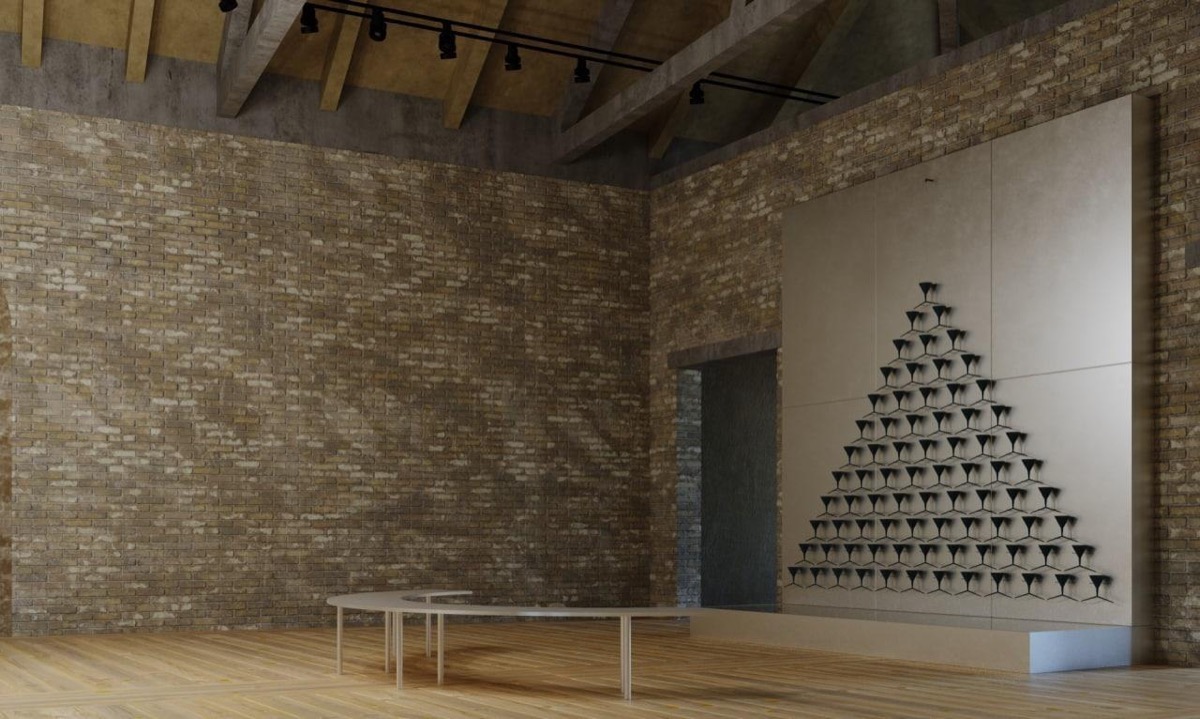 Following the Russian invasion of Ukraine, it looked unlikely that the country would be at the biennale. However, the intrepid artist Pavlo Makov managed to smuggle his work out the country and ship it to Venice just in time.

Focusing on climate change, Makov’s 12-tier steel sculpture, The Fountain of Exhaustion. Acqua Alta guides the flow of water, so that there is a steady stream at the top and just a few drips by the time it reaches the bottom. 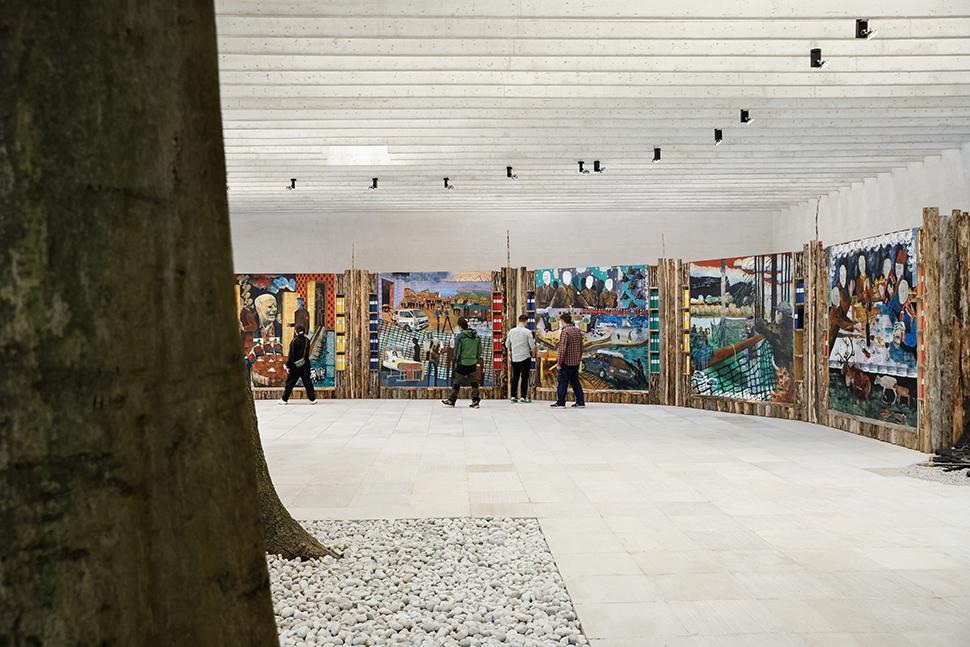 In an historic first, the Nordic Pavilion has become the Sámi Pavilion, showing the work of three indigenous artists, Pauliina Feodoroff, Máret Ánne Sara and Anders Sunna whose nation extends across the Nordic countries and into the Kola Peninsula in Russia.

Máret Ánne Sara shows sculptures made of reindeer sinews and wax to highlight the struggles reindeer herders face by the Norwegian state’s attempts to cull their herds. 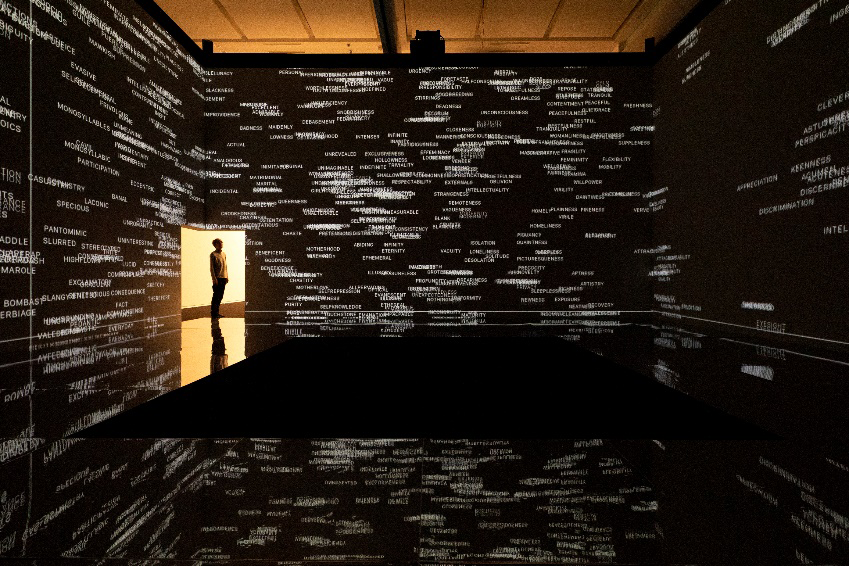 Art collective Dumb Type is known for immersive installations, video works, and performances that examine consumer culture in the modern and technology-fueled era.

Based on an 1850s geography textbook, their work for the Japanese Pavilion, entitled 2022, promises sensory saturation fitting for "a time of post-truth and liminal spaces". 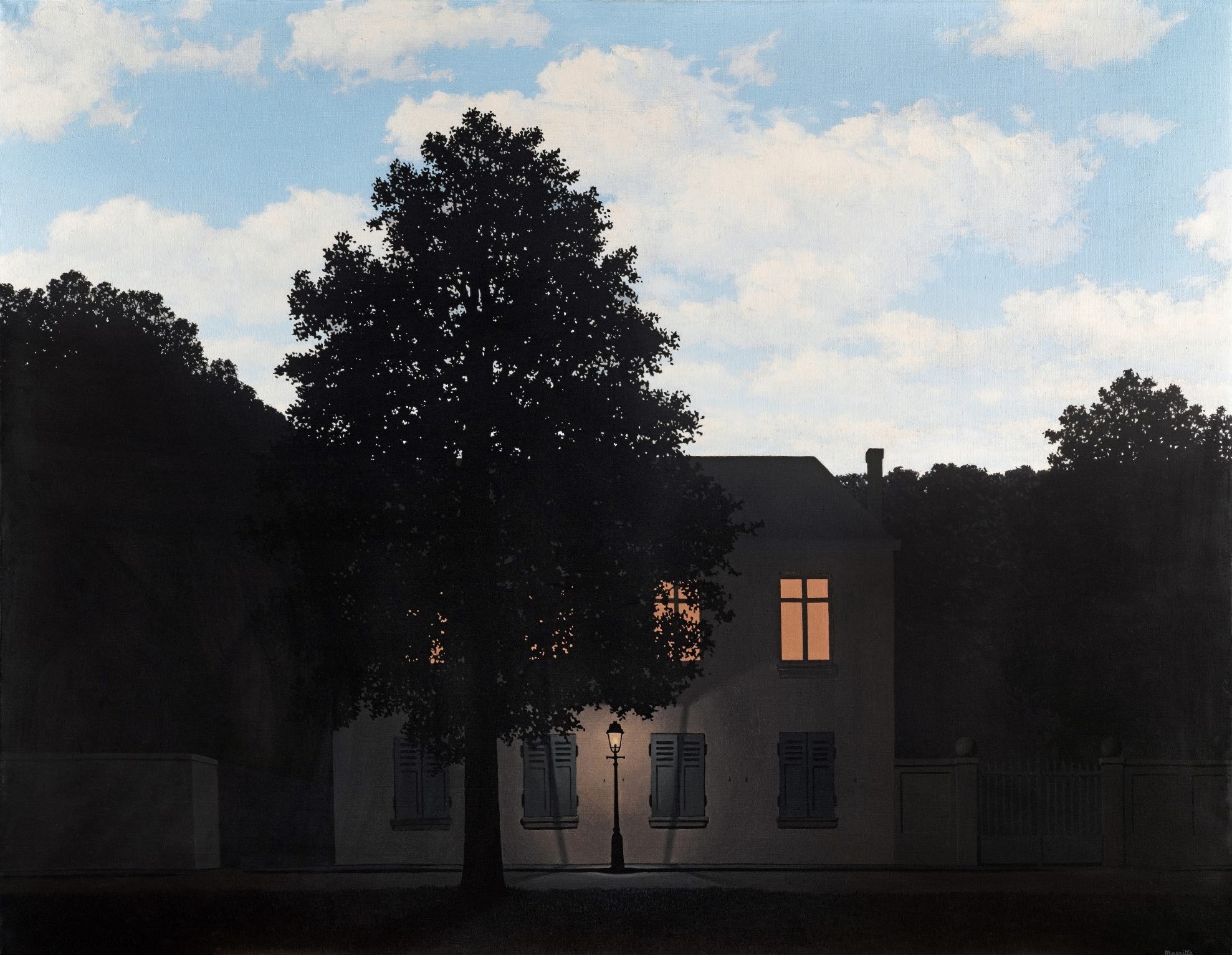