The Nymph of the Spring

From a triumphant nymph by Lucas Cranach to an inexplicably overlooked sculpture by Antonio Canova, a review of Christie’s and Sotheby’s Ancient Art and Old Masters auctions in London, July 2022.

Christie’s Old Masters auction – which fetched a total of £28.1 million- was led by The Nymph of the Spring, a classic mythological painting by Lucas Cranach the Elder, painted around 1540 and which had a pre-sale estimate of between £6 million and £8 million. Cranach is one of the very few Renaissance painters whose works appear on the market on a regular basis, which is why his prices have been somewhat inconsistent.

In 2011, Drouot put another Nymph (directly related to the Christie’s painting) up for auction in Paris with an estimated price of between 3 and 4 million euros, but the work was not sold as the minimum price was not reached. Two of the finest Cranachs to come on the market in the last 20 years, Bacchus in the Wine Vat in 2011 and The Faun Family in 2014, also failed to sell. Coming from the Cecil & Hilda Lewis collection, The Nymph of the Spring was sold for £9.45 million. A very good result that brought a round of applause from the room. 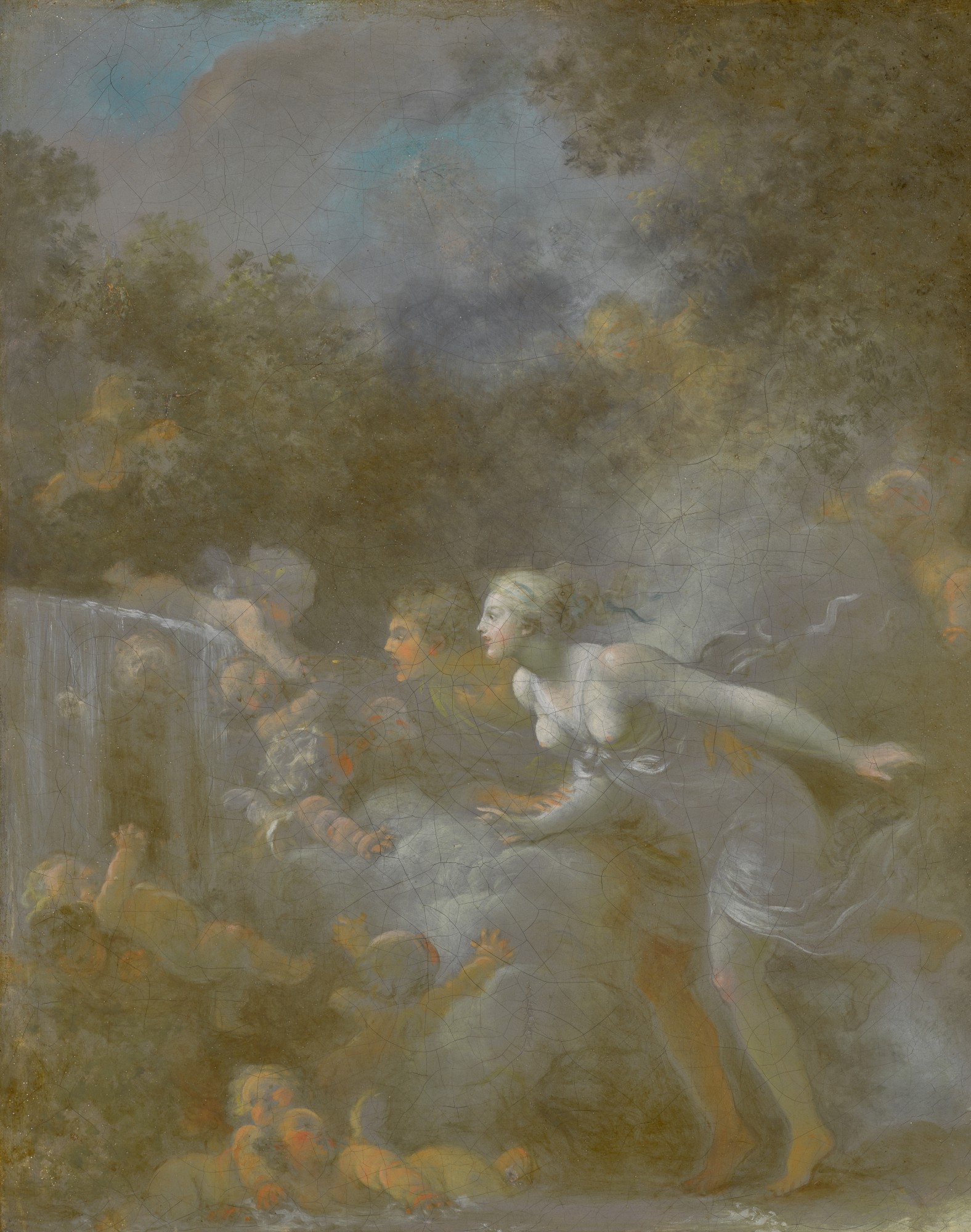 The Fountain of Love

Otherwise, the results of the rest of the auction were rather mixed. A beautiful landscape by Jacob van Ruisdael fetched £3.4 million, about three times its pre-sale estimate, while a portrait by Anthony van Dyck and a still life by Jan den Uyl both fetched over £3 million.Heidelberg, with a Rainbow, a spectacular watercolour by J.M.W. Turner sold in 2013 for $4.6 million failed to find a buyer in what would be the second biggest disappointment of the auction.

At Sotheby’s, the old masters painting auction could barely recover after the failure of its star lot, The surrender of the Royal Prince during The Four Days’ Battle, 11–14 June 1666, a naval scene by Willem van de Velde the Younger for which the auction house had hoped to fetch between £4 million and £6 million. Despite the best efforts of the auctioneer, Harry Dalmeny, no bid exceeded £3.2 million, and the work -which exactly ten years ago fetched £5.3 million at Sotheby’s London- was not sold.

One of the few bright spots at Sotheby’s auction was the sale of The Fountain of Love by Jean-Honoré Fragonard, an artist who in recent times has been undervalued by the market. The work depicts one of the favourites themes of the artist, who repeated this composition in several paintings, including one sold in 1999 for $2.2 million. The version at Sotheby’s, pale and almost ethereal, sold for £718,200, about three times its pre-sale estimate. 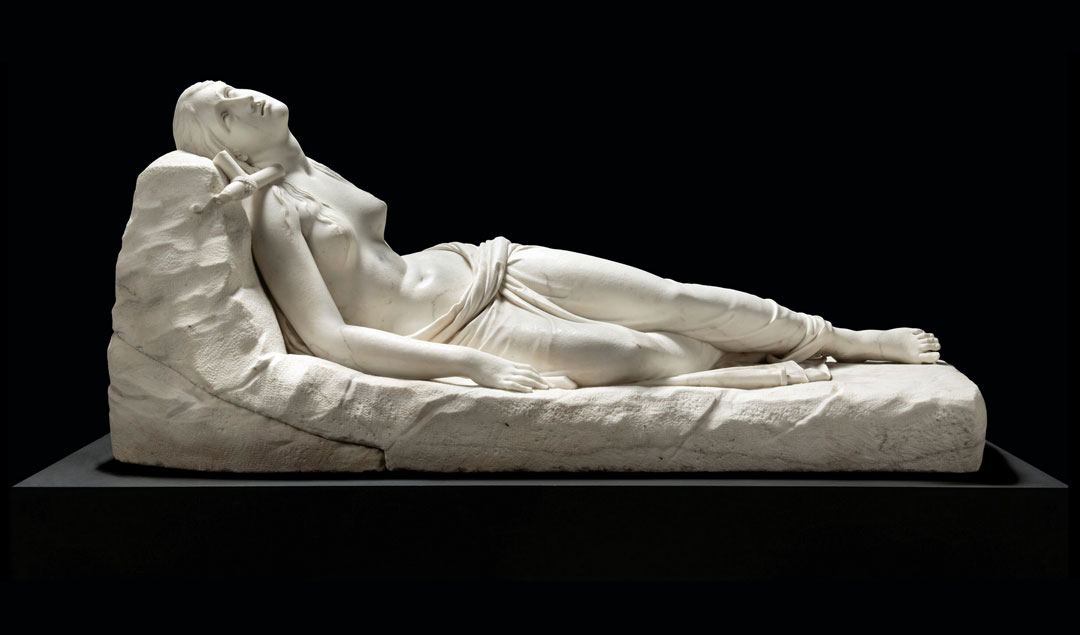 What happened with Antonio Canova‘s Maddalena Giacente, which Christie’s offered at its aforementioned Old Masters sale with a pre-sale estimate of between £5 million and £8 million, may see incomprehensible to some, given how rare it is to come across works by him in a public auction.
Canova is, of course, one of the most important sculptors in the history of Western art, and the greatest genius of neoclassical art alongside Jacques-Louis David. However his Maddalena Giacente despite being a work of remarkable importance, completed by the artist shortly before his death, clearly suffered from the fact of being placed in a garden and hence exposed to the elements for a very long time. Collectors undoubtedly spotted the far from impeccable condition of the marble, and this would explain why no one offered the minimum bid for this work in the end.

Moving on to the positive surprises: at Sotheby’s, a small Adam and Eve by Leonhard Kern (1588-1662) fetched £918,000, more than three times its most optimistic pre-sale estimate, while a tiny, intricate polyptych created by a Dutch artist in the early 16th century achieved £604,800, some ten times its most conservative pre-sale estimate.
Midway between sculpture and decorative arts, a pair of 19th Century Louis-Phillipe marble and giltwood figural torcheres from the Rothschild collection sold at Christie’s for £906,000, some fifteen times their most conservative pre-sale estimate. 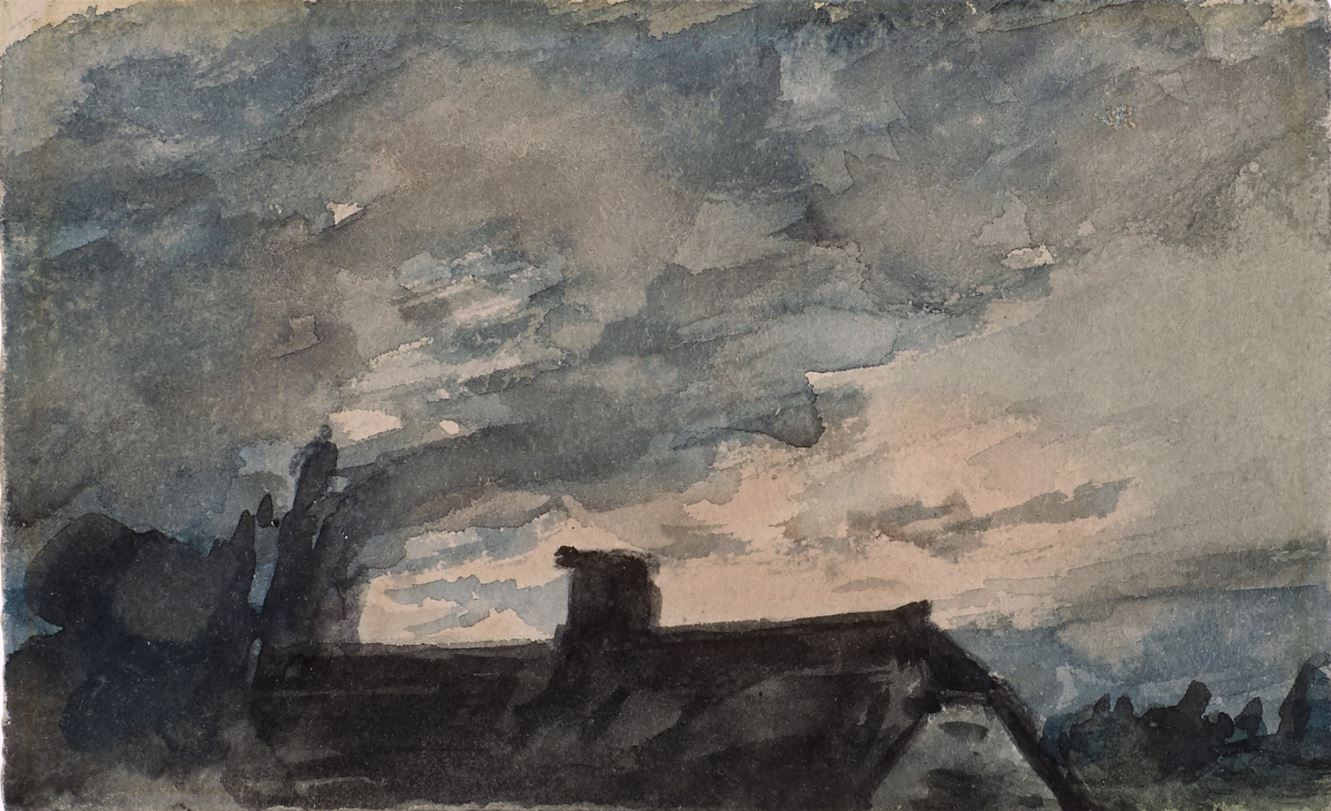 Drawings and works on paper

In this type of classic week art auctions, some of the most interesting works that can be acquired at reasonable prices can be found in the works on paper auctions. For example, Sotheby’s opened its auction of Master Works on Paper from Five Centuries with a small Annunciation of the Shepherds by Simon Bening, one of the great miniaturists of the Renaissance, selling for just over £30,000.

Disconcerting was the result (also at Sotheby’s) of two leonardesque drawings attributed to Giovanni Antonio Boltraffio, both valued at between £80,000 and £120,000. While a head of St John the Baptist fetched £189,000, a head of St James the Less, of identical dimensions, failed to find a buyer. Twilight, a watercolour by John Constable, crushed its pre-sale estimate of £20,000 to £30,000, selling for £346,500.

An Egyptian limestone group statue for Mehernefer and his son

The two big superstars in the field of ancient art were included in Christie’s eclectic The Exceptional Sale auction.

An Egyptian sculpture of Mehernefer and his son, from the 5th Dynasty, had an unofficial pre-sale estimate of around £4 million, very reasonable considering its importance and unbeatable provenance, having belonged to King George III (1738-1820). Impossible not to recall the record-breaking (and highly controversial) sale of Sekhemka, another Egyptian statue from the 5th Dynasty, for £15.8 million in 2014. The statue of Mehernefer, not as famous as that one, was auctioned for £6 million, a very strong result.

A Roman marble bust of the god Hermes from the important Lansdowne collection carried a pre-sale estimate of £3-5 million, but no one bid above £2.6 million, and the work was not sold, in further evidence of the bewilderment and unpredictability of the ancient art market, especially when compared to the $23.8 million paid in 2010 for another Roman bust, which had previously been estimated at between $2 million and $3 million. 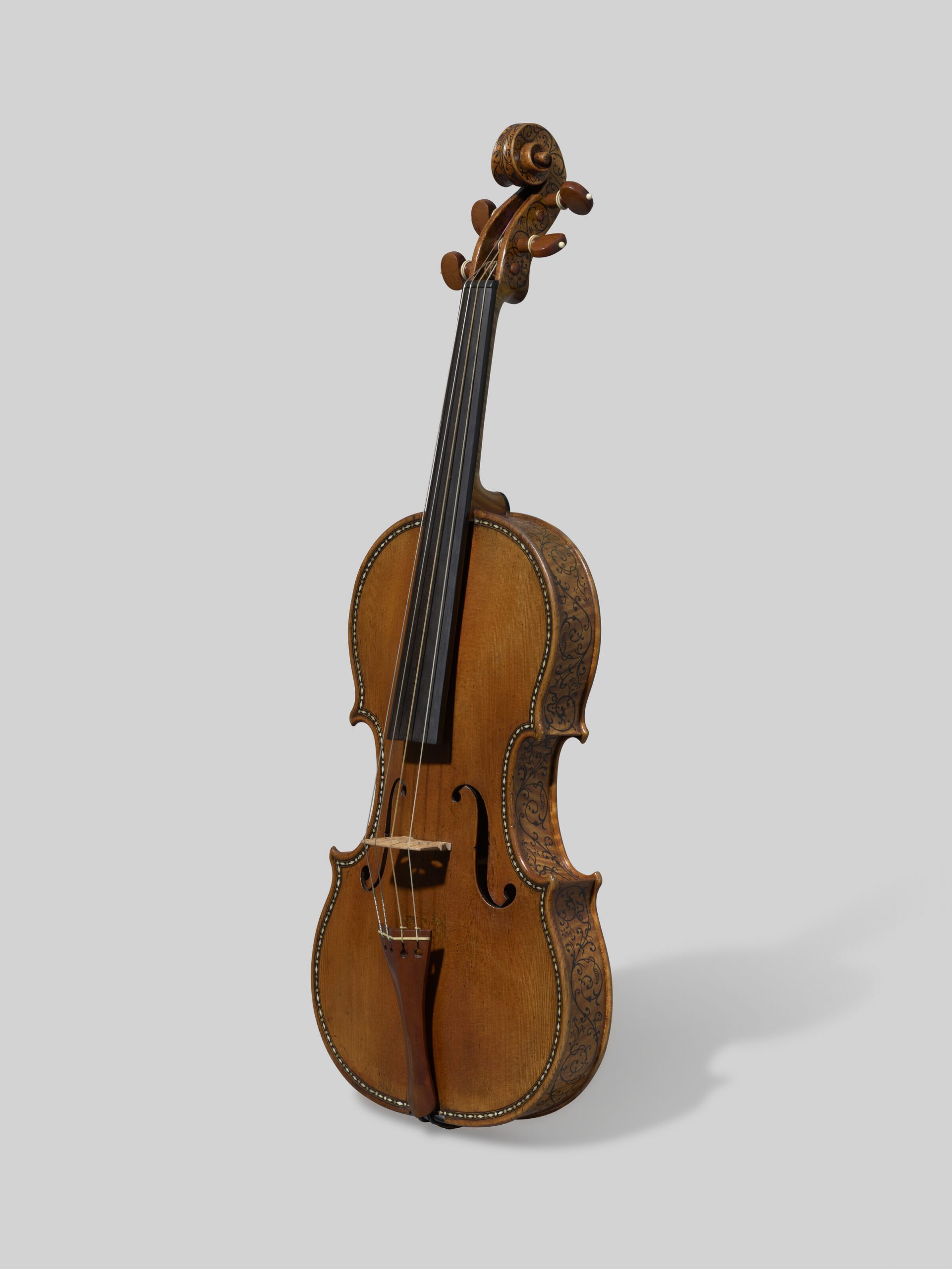 Stradivari and the ivory curse 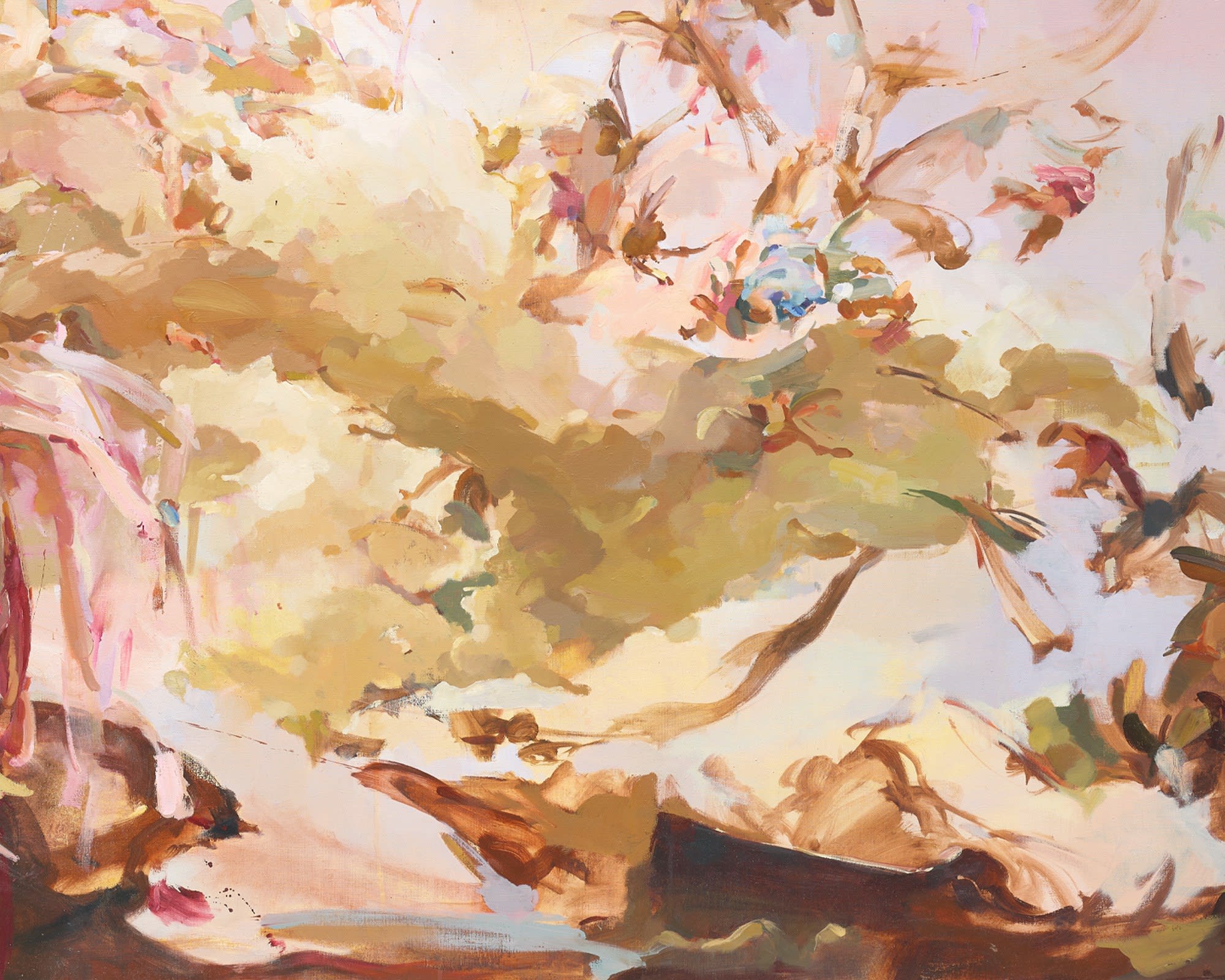 Is recession tackling the art market too? Lack of fireworks at London's marquee sales