With the hearts and minds of everybody understandably focusing on the developments of the escalating Ukrainian crisis, last week in London saw major auction house powerhouses Christie’s and Sotheby’s pulling off a combined £470m from their Modern, Post War & Contemporary Art evening sales.

At Sotheby's, the evening was split into a 53-lot Modern and contemporary section, which made £191.2 (with fees) against a presale estimate of £154.8-£201m (all estimates are calculated without fees) and the 20-lot ultra-contemporary "The Now" sale, which made £30m (with fees) against an estimate of £15.6-£22.3m. The sell-through rate for the entire evening was 88% by lot. Around 60% of the works carried guarantees.

The star lot of the evening was a René Magritte painting that became the most expensive work by the Belgian Surrealist at auction after it hammered for £51m (£59.4m with fees). That result is nearly triple the artist's previous record of £20.1m, achieved in 2018 at Sotheby's in New York.

'L’empire des lumières' (1961), one of the largest from a series of 17 paintings of the same name, was on offer from the collection of Anne-Marie Gillion Crowet, the daughter of Magritte’s patron Pierre Crowet. The painting, which had never been sold until today, had remained with the Crowet family and was on long-term loan to the Musée Magritte in Brussels from 2009 to 2020.

Estimated in excess of £45m, the bidding battle for it climbed to £59.4m after a tense three-way bidding battle to become the highest valued painting we have ever sold in Europe and nearly trebling the previous record for the artist. 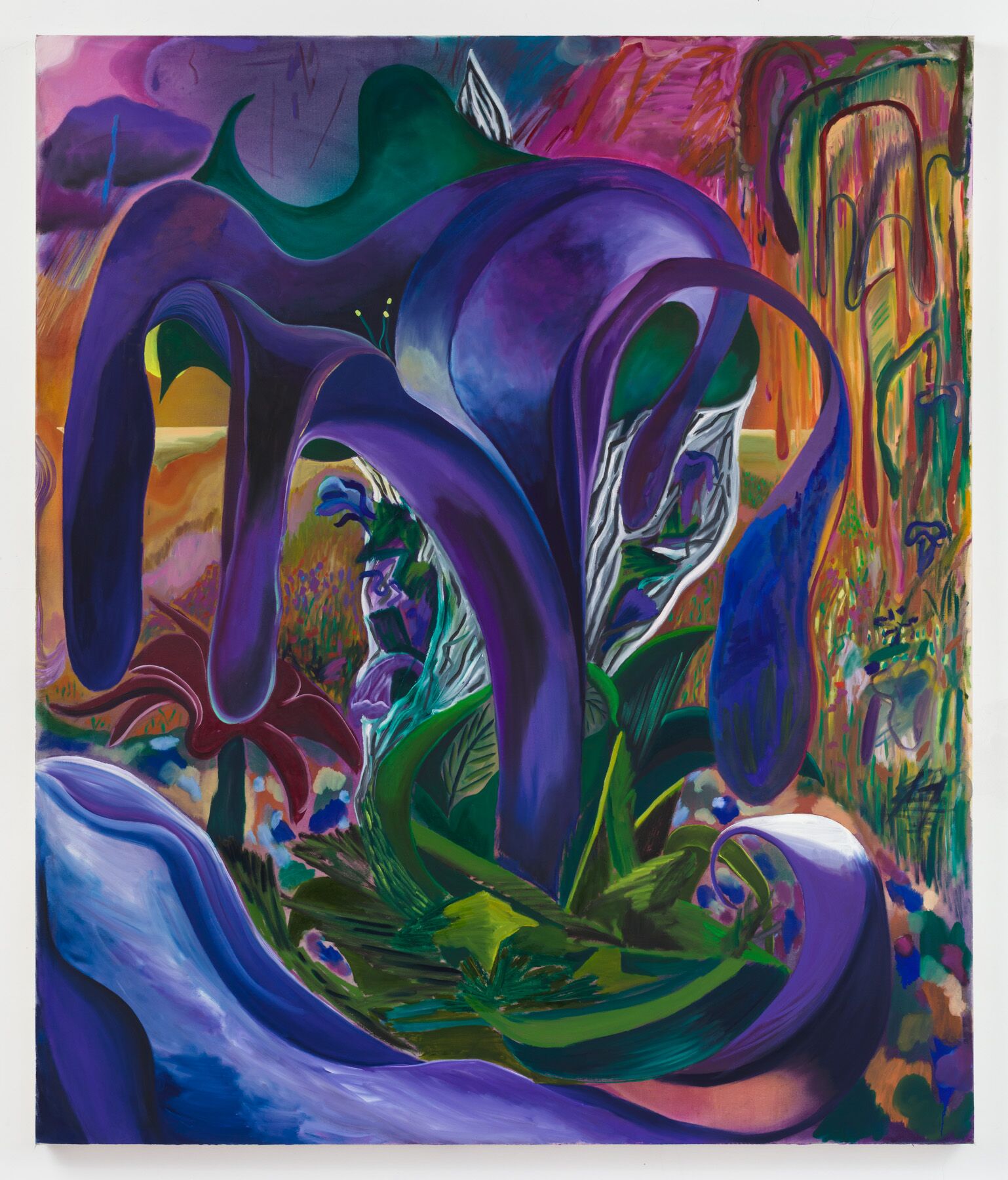 Before the evening sale, the stage was taken by ‘The Now’ sale, whose catalogue was filled with works by artists barely in their fourth decade. The auction immediately started with a remarkable result, when Rachel Jones's rough and visceral 2020 painting 'A Slow Teething' was hammered for £490,000 (£617,400 with fees), against an estimate of £50,000-£70,000.

After the section dedicated to the emerging names, new auctioneer Helena Newman took the gavel and led the second half of the evening.

Apart from the piece by Magritte, six works by Claude Monet were offered, of which four sold. The first on the block, 'Nymphéas', a waterlily painting from around 1915, came from a private Japanese collection and hadn't been offered at auction for 40 years. It was estimated at £15m-£20m and sold to a European phone bidder on the line with specialist Simon Stock for £23.2m (with fees).

Some lots later, the remaining five were offered in quick succession to lesser success: of them one was withdrawn to be sold at Sotheby's New York May evening sales; another was passed; an 1897 floral work hammered at £7m (with fees) against a £10m low estimate; a prune still-life made its low estimate at £1.3m (with fees) and a coastal painting from 1897 hammered at nearly the high estimate of £5m (£5.3m with fees).

The night before, on March 1st, a similar marathon of auctions – happening live in Shanghai, then London to end with some Surrealism - had taken place at Christie's, with an overall £249m achieved. It was the auction house’s highest total for an evening event in London; the sell-through rate was 90 percent.

In total, 110 works were offered: 20 in Shanghai, 68 in London’s main sale, and 22 in its Surrealist offering. And, as it has become customary in recent years, a significant part of the whole bidding activity came from Asia: around a third of bidders, to be precise, with 28 percent being millennials. The top lot of the evening was Franz Marc's 'The Foxes (Die Füchse)' (1913), which was recently restituted from a German museum to the heirs of the Jewish collectors who sold it to escape the Nazis. A phone bidder in London won the work for a record £42.7m, exceeding its estimate of £35m and more than doubling the artist’s previous highest record. 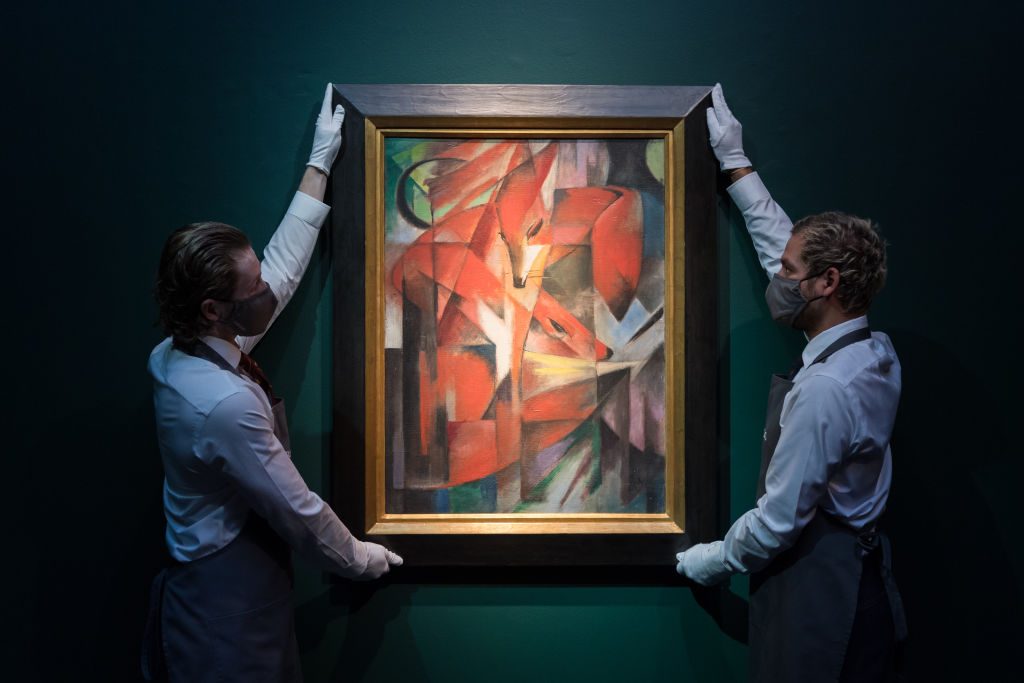 In Shanghai, where the show started, most of the energy surrounded ultra-contemporary names: Emmanuel Taku’s 'Ripped' (2021) sold for £194,672, more than eight times its estimate; 'Colors' (2020) by Edgar Plans sold to London for £524,142, more than double the artist’s previous record.

Furthermore, Amoako Boafo confirmed his market appeal, with his 'Orange Shirt' fetching more than £876,000, far exceeding its high estimate of £594,265. The same painting had sold for $212,500 at Christie’s NY less than two years ago. 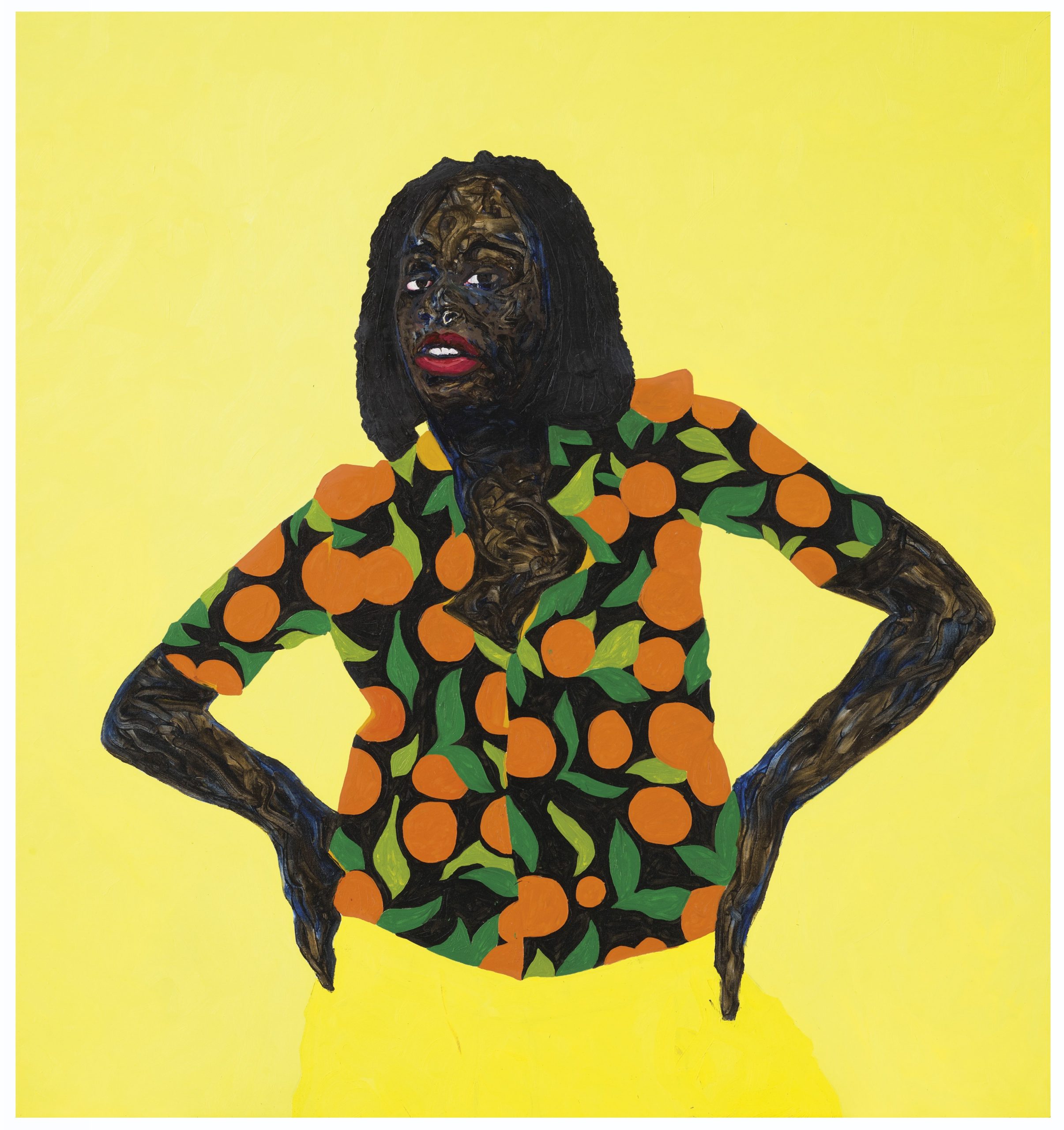 After Shanghai, it was London’s turn.

As proof of a new market shift, works by Hirst, Hodgkin, Chagall as well as Renoir struggled to sell right below or on the lower end of their own estimates. By contrast, works by Victor Man, Angel Otero, and Flora Yuknovich sold for multiples of their estimates. Flora’s performance in particular was significantly impressive: her painting, a twist on Fragonard, fetched £1.9m, more than five times its upper estimate. 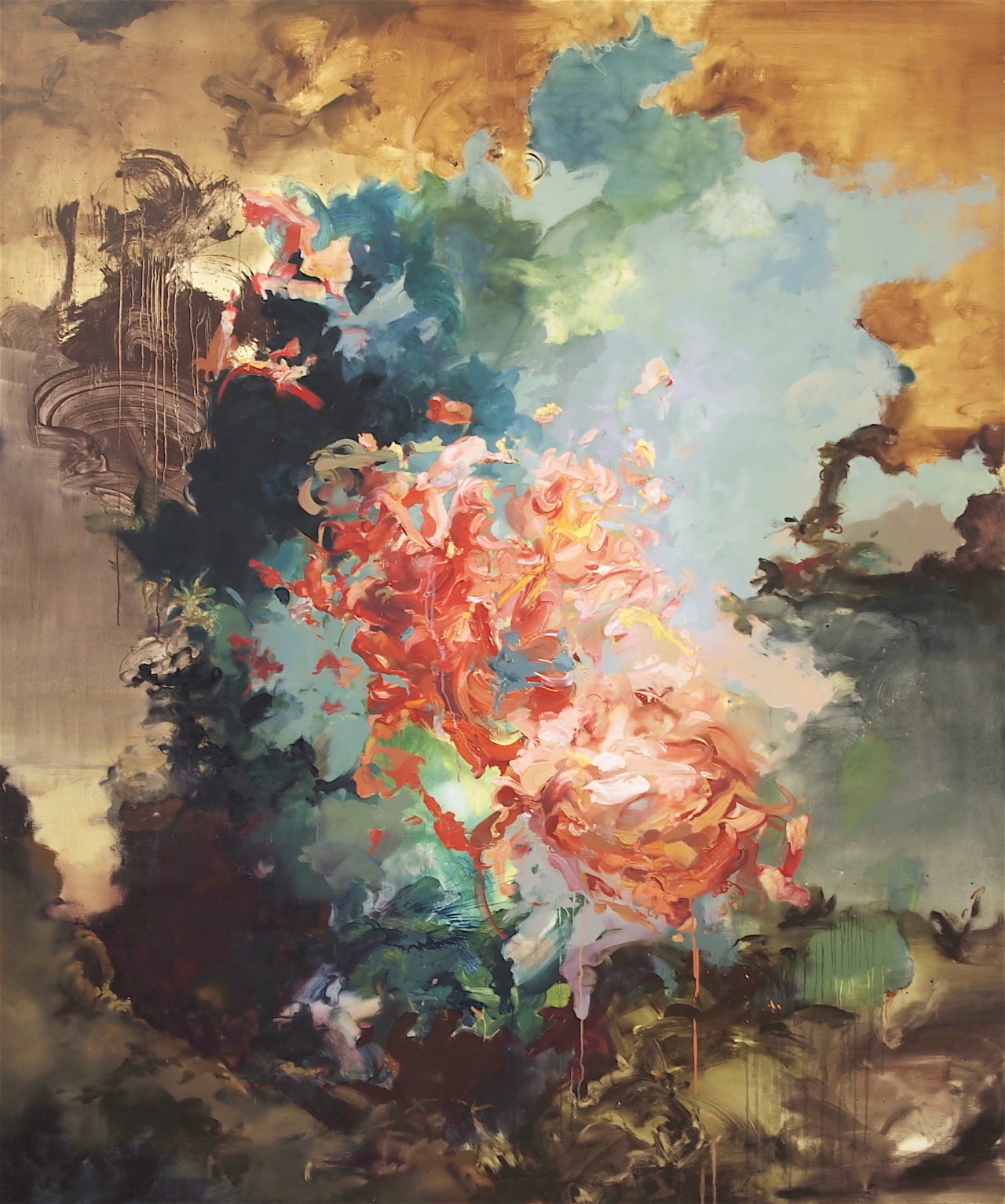 Tu vas me faire rougir (You're going to make me blush) 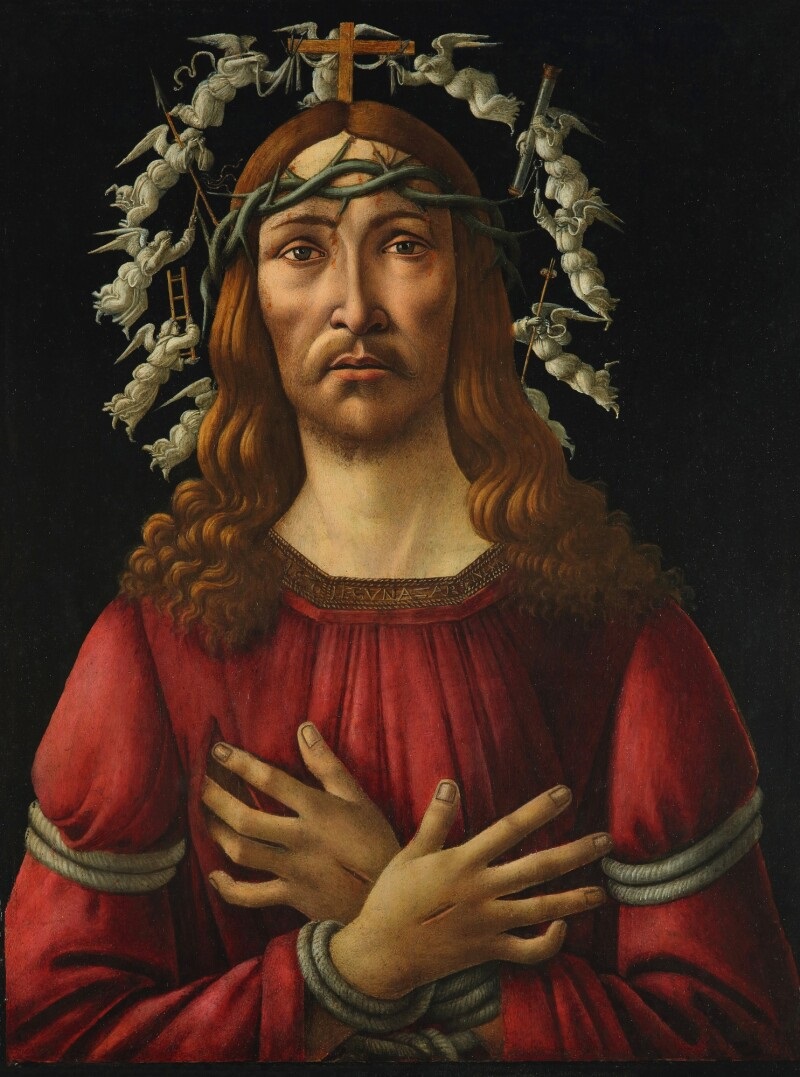 The Man of Sorrows