A young woman holding a distaff before a lit candle

After the Christmas/New Year break and a long sleepy January, the Western art market was awakened by the traditional series of auctions taking place in NYC, all dedicated to Old Masters. The big event was Sotheby’s evening auction of Old Master Paintings, with Christie’s confirming the decision which quite radically changed their global auction calendar (at least for what concerns the American side of business) and hence concentrating the efforts on drawings and prints.

Study of a horse with a rider

With no superstar lots available this time round at Sotheby’s (many surely still remember the Getty’s spectacular 30m USD purchase of Gentileschi’s Danae a year ago), it was inevitable that expectations were lower. There were nonetheless surprises, confirmations and disappointing outcomes which then led to a final, unquestionable verdict: Northern European painting clearly played the major role on the scene, whereas its Southern counterpart experienced a troubled night.

As always in such cases, the remarkable prices achieved were determined by a mix of artist’s allure, unparalleled quality, stunning condition as well as great provenance.

The study by Rubens - for a long time wrongly attributed to Van Dyck and as such sold through Christie’s Amsterdam in 2015 - dates back to the 1610s, at a time when he produced several studies to cope with the increasing demand for equestrian portraits (one of the subjects he was renowned for). The requests of collectors rapidly became so pressing that Rubens started employing collaborators who were mainly tasked with replicating his prototypes and patterns, most of them subsequently disappeared, were dismembered or included into larger compositions. The latter was also the case of this work; however, once removed the later added background, its importance both from an art-historical and bibliographical point of view was revealed.

Adam de Coster’s great performance was probably invigorated by the current Caravaggio-mania and the vast popularity that subjects inspired by Caravaggio's oeuvre are having, such as with the tenebrism of the present canvas: of very fine quality, life-sized, with the suffused light emanating from a candle and gently illuminating the tender, delicate features of a young woman as well as the rich fabrics of her outfit. Unpublished until 1992 (when it was offered at auction for the very first time, also through Sotheby’s in NYC), it still represents one of the most significant nocturnes by this artist. 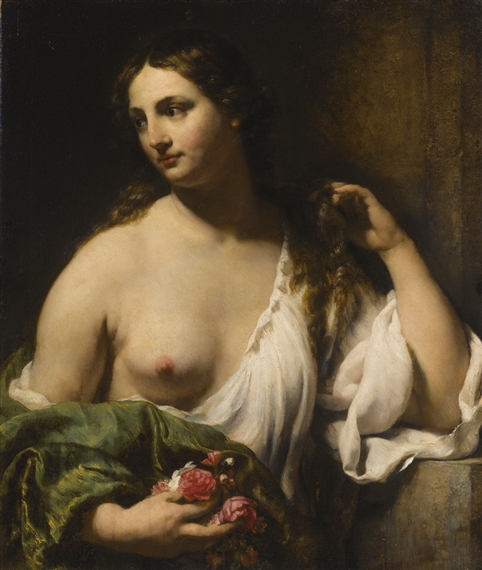 Finally, Drost’s sensual Flora perfectly epitomises the influence of Rembrandt, which marked his early training, accompanied by the admiration for Titian and his works that Willem had the chance to repeatedly admire during his stay in Venice in the 1650s (when this picture was conceived). The legacy coming from 16th Century Venetian painting can be seen in the wise use of warm touches of paint highlighting the soft skin of both face and torso, the shimmering hair emerging from the dark background and the elaborate folds of the sleeves – all speaks of Titian and his technique here.

Elsewhere, the Spanish section unfortunately performed rather poorly: a Kitchen Still Life attributed to Diego Velázquez and the impressive Mystic marriage of Saint Catherine by Francisco Zurbarán were supposed to be (and rightly so) among the highlights of the night but in the end both failed to find a buyer. Only the rare group of early prints by Goya from the series Los caprichos, in their original binding, managed to sell well (estimate was 500,000 – 700,000 USD, achieved 912,500 USD - with fees) while another unexpected casualty was The fountain of love by Jean-Honoré Fragonard.

The Italian group was headed by the stunning Head of a woman by Orazio Gentileschi - once in the Collection of King Charles I - which went for 1,812,500 USD including fees, slightly below its catalogue estimate (2,000,000 – 3,000,000 USD). Furthermore, confirmation of Botticelli’s continuing appeal came from the good results obtained by two tondos (by him and his workshop), both comfortably reaching 792,500 USD, with fees – a result replicated also by the magnificent 18th Century Venetian view by Michele Marieschi. The auction grand total was 27,234,000 USD (fees included), with 21 unsold lots out of the initial 56 (one withdrawn).

Leaving Sotheby’s, with Christie’s not showcasing any painting-based sale as consequence of the calendar amendment mentioned above, the attention of Old Masters aficionados was all focused on fine drawings and prints – two categories in the past often overshadowed by the proximity of their ‘bigger auction brother’.

The two respective star lots were the drawing by Rubens Scipio Africanus welcomed outside the gates of Rome, after/on top of an earlier composition by Giulio Romano (estimated between 500,000 and 700,000 USD, it went for 1,567,500 USD – with fees) and the monumental print entitled The submersion of Pharaoh’s army in the Red Sea, after a design by Titian (carrying an initial estimate of 200,000 to 300,000 USD, it was sold for 751,500 USD – fees included). 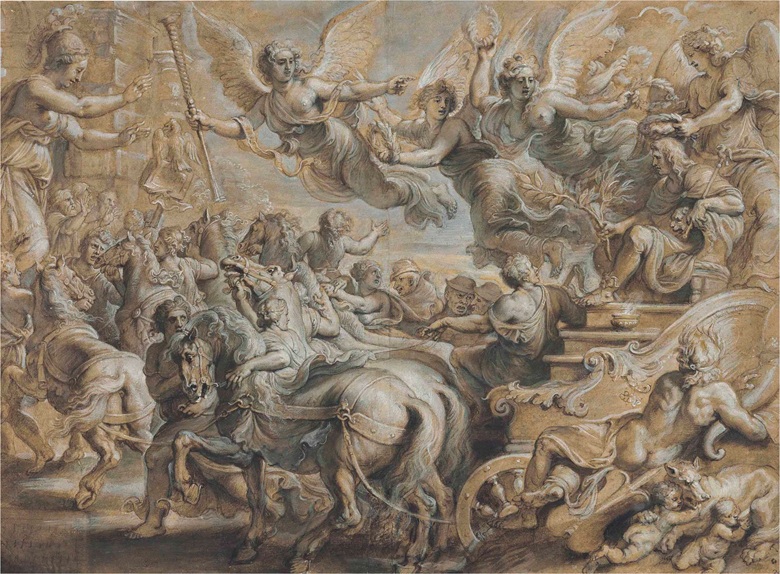 Scipio Africanus welcomed outside the gates of Rome

(after Giulio Romano)
circa mid-1620s

The drawing – bearing a typical late-Renaissance composition in the prototype by Giulio or his workshop - witnessed a proper Baroque transformation after Rubens’ intervention, being subsequently crowded by bold, robust figures of human beings and horses vigorously characterised by energetic touches of bodycolour.
Included in the same sale, a brief mention deserves the detailed A hunter with his dog in a landscape by Goya (hunting was one of his favourite subject, being a passionate hunter himself), which also managed to exceed the 1m threshold by selling for 1,111,500 USD (with fees; estimate was 600,000 – 800,000 USD) after a battle between two bidders in the room and another one on the telephone. 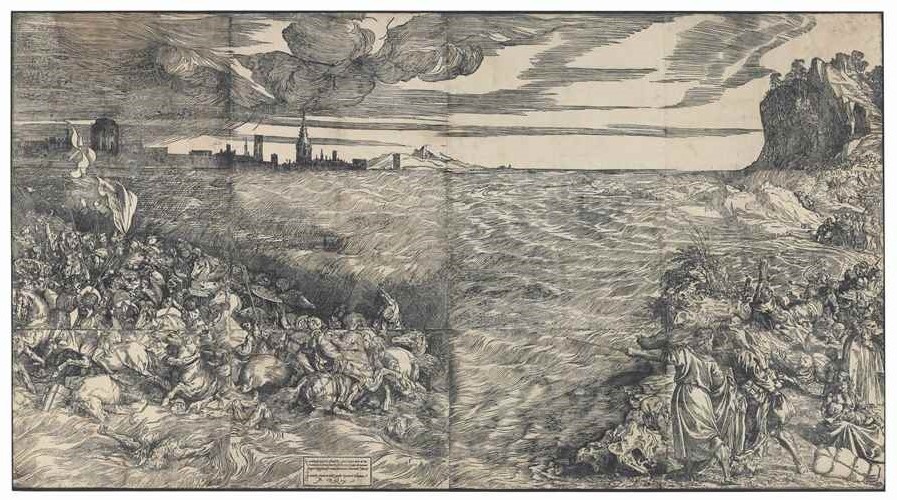 The Submersion of Pharaoh’s Army in the Red Sea

Before to conclude, the print after Titian was impressive in its size, filling an entire wall at the Rockefeller Center (12 blocks measuring 1,229 x 2,219 mm in total; the 12 sheets 1,248 x 2,254 mm). The Master’s genius – who presumably created the design by working either on a cartoon or perhaps directly on the woodblock – is clearly revealed in all its magnificence in the rendering of the threatening clouds and especially of the stormy sea which is about to sweep away the Egyptian army and is undoubtedly the main, imposing element of such a dramatic scene.