Picasso is still the man to beat...

If you were of the impression that heavy snow and Siberian weather conditions or financial turmoil can stop the appetite of big collectors, well think twice…

Last week the Impressionist & Modern Art evening sales put on display by the big auction houses in London managed to amass an overall £285m (with fees).

No records were broken (even though stunning results were not missed) and the absolute dominator of the whole week was – surprise, surprise! – Pablo Picasso.

The Spanish superstar was featured extensively at both Christie’s and Sotheby’s (the former having 9 works by the Master in the catalogue, the latter 4) and all the pieces sold rather well. London-based art advisory firm Gurr Johns was particularly active on behalf of their high-profile clients in this sense, purchasing 11 of them out of the total 13 and splashing a grand total of £100m (including buyer’s premium).

No wonder if we therefore decided to focus on Picasso’s two top lots, democratically split between Christie’s and Sotheby’s. 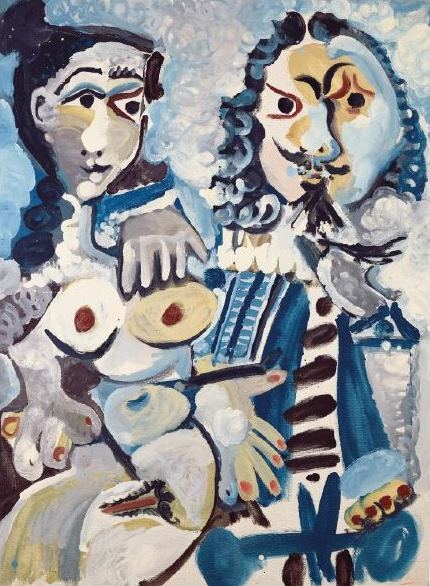 The week’s first prize lot to test the market’s robustness was Mousquetaire et nu assis. Completed on April, 11th 1967 at his home/studio in Mougins, Southern France, at the end of a period in which he was recovering from surgery and saw the painter immersing himself in extensive readings. Literary sources definitely had an impact on the appearance of the musketeer’s figure in Picasso’s production from late 1996 onwards, as confirmed by the artist as well (see novels by Dumas or Shakespeare).

However, the world of the Old Masters had a clear influence too. Frans Hals, Goya, Velázquez, El Greco but especially Rembrandt, for whom Picasso had a deep, authentic respect (and almost identified with) since he was seeing the Dutch very much like a predecessor of himself, with the same stigmata of greatness that only the gifted ones receive.

In this specific case, two paintings by Rembrandt must have inspired the Spanish painter: The Nightwatch (1642, currently at the Rijksmuseum in Amsterdam) with the figures of the guards resembling of musketeers and more importantly Portrait with Saskia (circa 1636, now at the Staatliche Kunstsammlungen in Dresden), representing the artist with his younger wife Saskia. In this second case, the link is even more direct being the sensual, seated nude in the foreground of Picasso’s canvas his final great love, muse and wife Jacqueline Roque who played a major role in the master’s impressive late productivity.

Characterised by lavish, loose, tactile brushstrokes and marked by a distinct eroticism, the present work perfectly epitomises Picasso’s last phase of his magnificent career where desire and lust for life balance each other in a remarkable way.

Offered to the public with an estimate between £12 and 18m, it sold for almost £14m (including fees).

Sotheby’s was quick to respond to the challenge the day after…and what a response! Femme au béret et à la robe quadrille (Marie-Thérèse Walter), dated 1937, was bearing an estimate on request and in the saleroom was fiercely contested by two different phone bidders. Post-sale, it was revealed that the winner had been Gurr Johns (and who else could it be?), submitting the decisive bid of £44m hammer (£49,8 if you consider the buyer’s premium). Boldly painted and with a rich, primary palette of colours, it was completed towards the end of a key decade for Picasso, for both personal and broader reasons. The 1930s were opened by the great influence that the artist’s favourite model and then lover Marie-Thérèse Walter had on his production. This explains why the portraits of this period are imbued with an increasing sensuality which started fading away in the second half of the 30s: the reason being the encounter with young talented photographer Dora Maar in late 1936, whose beauty was less voluptuous and more algid, definitely more intellectual.

Picasso found therefore himself between the two of them and the present picture sees them both depicted, the red beret and the profile are a clear reference to Marie-Thérèse, whereas the angularity of the face and the long hair recall of Maar. In other words, we are here in front of a double-portrait of the two muses who were at the time competing for the painter’s attention (and love).

Additionally, 1937 was also the year ofGuernica, conceived by Picasso as his artistic manifesto against the escalating horrors caused by the Nazi/fascist regimes increasingly gaining sinister power in Europe. Behind the powerful faces of Guernica’s weeping women is Marie-Thérèse again – an additional evidence of the extreme importance the model was still having in the Master’s life.

That was it from last week…but do not worry, should you still be feeling in desperate need of more high quality art, it is now the turn of Contemporary Art…and then TEFAF is about to start…