Sparkling and glamorous as ever before, Sotheby's opened the new Autumn/Winter sale season in London with a high profile single owner auction this September: the Collection of venerated Peruvian fashion photographer Mario Testino, a true icon for whoever has an eye for fashion and photography. But the sale at Sotheby's revealed another aspect of Mario's talented and versatile profile : his taste for contemporary art, particularly when it comes to discover new, emerging talents and support them accordingly.

The Collection, sold to benefit the activities of Museo MATE founded by Testino in Lima in 2012, perfectly reflected the museum's mission and aspiration: that of showcasing and divulging the production of Peruvian, Latin-American as well as respected international artists.

Several of the names presented and offered to the public over the course of two consecutive days (there was a first selected afternoon session on Wednesday the 13th, then followed by a wider Day session on Thursday the 14th) sound now familiar to many connoisseurs; however they were collected by Testino when they were 'only' interesting yet young prospects (Tauba Auerbach is a clear example of this). Others, whose works were acquired at a later stage as a continuous demonstration of Testino's voracious appetite and insatiable curiosity for the new and the experimental, may sound half-unknown still nowadays (see James Welling and Verne Dawson).

From the ample selection available, we picked up two works, from the first and second session respectively, which managed to particularly caught our attention: the striking canvas entitled Blue Sauna by Adriana Varejão and St Francis, painted in 2007 by US artist Kehinde Wiley.

Blue Sauna is part of Varejão’s most successful and praised series (Saunas and Baths). Completed in 2006, the apparently flat and superficial subject hides complex conteptual, subtle meanings investigating the fields of colonialism and cultural appropriation deeply rooted in the history of her native Brazil.

Considered by the artist as perfectly democratic spaces since in them social disparity is eliminated and everydoby is exposed to the potential judgement of the others, saunas are extracted by Varejão from their traditional European cultural context and their main feature – the omnipresent tiles – becomes the ideal link through which connecting dominators and dominated, throughout the centuries and on a global scale. 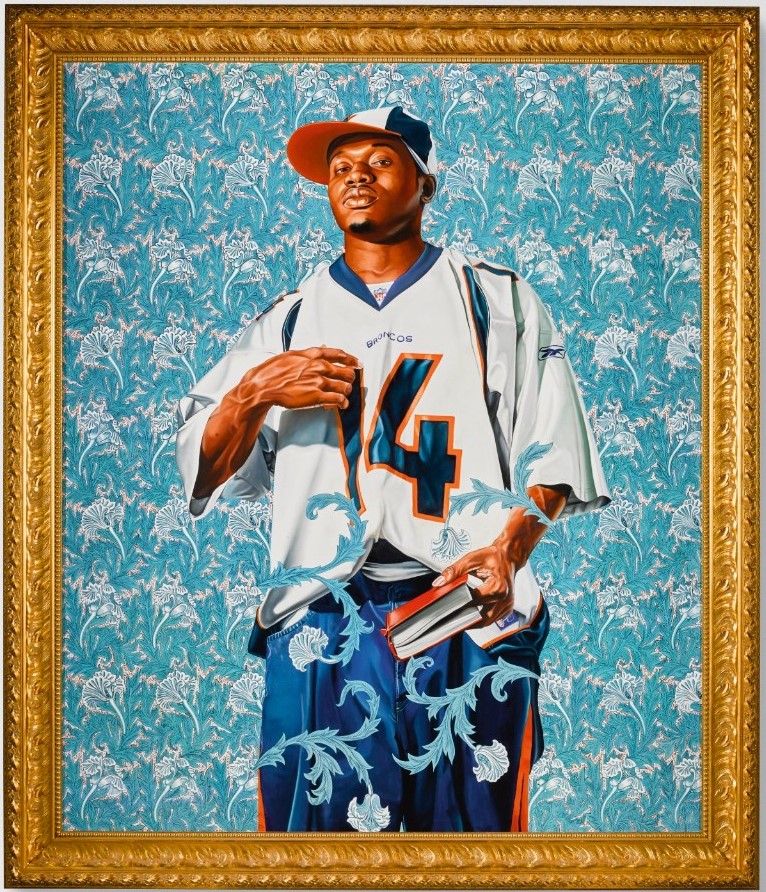 Characterised by Wiley’s impeccable and multifaceted technique, stimulated by the meticulous study of the European Old Masters (such as Tiziano Vecellio or Giovanni Battista Tiepolo) and juxtaposing various artistic styles across centuries, St Francis places itself in the painter’s contemporary glorification of black bodies as well as culture. By depicting his subjects in heroic poses deliberately emulating those of distinguished individuals from the past, Wiley investigates the notion of ‘blackness’ in today’s world and positions it in sharp contrast with centuries of artistic iconography, based exclusively on the parameters set by the ‘white man’.

Before to conclude, the atmosphere in the saleroom - meticulously prepared by Sotheby's staff and adorned by flashy, colourful beams in a way resembling the stage of an eccentric fashion catwalk - was vibrant, particularly the evening of the 13th, and the response from collectors did not disappoint: the overall sale total exceeded £8,7m (buyer's premium included), with eleven auction records smashed.

The creative genius and far-sighted intuitions of Mario Testino definitely helped Sotheby's start the new season on a remarkably high note. Whether this will positively influence the upcoming dedicated sales in early October, strategically coinciding with Frieze Fair Week and notoriously the moment when the pulse of the international contemporary art market is taken, is yet to be seen...